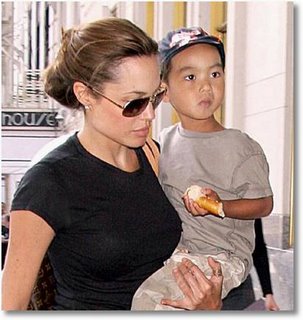 If Angelina is feeling dirty - she can afford to fix it, any place, any time. On Friday she and Maddox stopped at a posh hotel just so they could each take a quick shower.

Jolie and her son made a stop at Shutters On The Beach Hotel in Santa Monica, California so they could shower and freshen up. A source tells American publication Star, "Angelina said they only wanted the room for two hours - time enough for them both to take a shower. She was very sweet and seemed like a concerned mom. "It was just very bizarre, when she and Brad own two houses here in Los Angeles, that she would need to spend that kind of money on a hotel room just so she and Maddox could shower."

Weird, but look who we're talking about.

Maybe she and Brad had a tiff?

One more strange day in the life of that home wreckin ho.

I don't even want to imagine why she would do that. After kissing her brother on the mouth...that bitch is capable of anything.