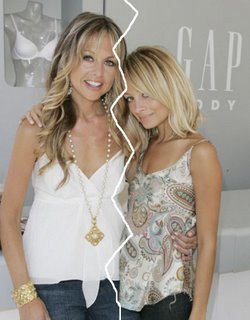 'Friends' of Rachel Zoe are speaking out against Nicole Ritchie to Page Six. Looks like a case of She Said She Said.

Last week, Richie leaked to Us Weekly that she was dumping her stylist of two years because she "wanted to surround herself with positive people and influences. Nicole didn't trust Rachel anymore," according to a magazine source. However, a friend of Zoe told Page Six, "Please - and Paris Hilton, her new best friend [after a long estrangement], is a good influence? Give me a break. Rachel was acting as a concerned friend and voiced her concerns to Nicole about her lifestyle, and Nicole didn't want to hear it."
Posted by Leisa at 10:47 AM

Rachel is nothing but a crack ho. I'm amazed her friends have the nerve to even try and defend her.